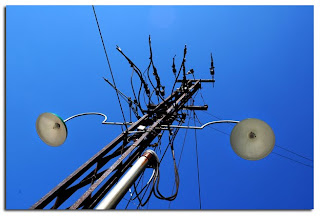 
Laying there, I had a feeling of a continued fall, the world slowly turning around, while Nepomuceno walking away unabashed, never turning back to look at the spot where we had splashed, not once slowing the pace to smell that scent of freshly wet grass in a summer morning, unabated by the threads and "laces" of all those low growing bushes wrapping around his feet while he walked back to the road, to the worn out pavement still reflecting last night's rain, while my eyes letting me know they were about to close again, one last time.
I could see we'd reached the end of things, the last illuminated point at night, after which all that blue started  slowly to melt away, impossibly pixelating on faded grays, the pavement dying at a distance, exposing stones and dried mud where no electricity would ever reach. A silence of bits and of a smile-only cat figure sitting on a pole, the scent of palm wax on recently cleaned wooden floors, so many years ago that it had become just a fleeting glimpse, a faded gray:  a life I had no idea, anymore, full of cartoons watched on technicolor, the Saturday mornings' truck selling eggs and vegetables. The windmill of a lifetime slowly swirling around that blue sky, further exposing those interrupted cables. What a jump - I barely heard me say, what a splash this had been. And as it were I could not move, and it had finally come to me.
And why on earth my last thoughts were going to this middle-aged woman dancing at a disco in the Philippines, in the eighties of my budding years? Slowly dancing at a feminine voice, "here lies love, here lies love.."