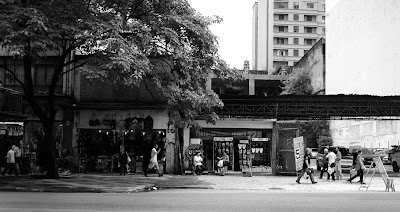 [Pereira was a long time friend of that sidewalk, the shade of that almond tree. He also knew the smells that would come from the sewer, if the weather was too hot. Recognized the breeze that, on cooler days, would bring scents from the market two blocks down to the south, with its many stands selling spices, cheese, codfish, oils, and which fully supplied the whole universe of fancy restaurants in town.

Pereira had grown up through those streets. In the afternoons, he would wear out his voice announcing through his lungs unbelievable deals on fake leather bags, colored cotton socks and men's underwear. His grandfather sat on a leather stool as old as the place - this tabouret, he repeated often, had sat foot there with him the first day he opened those doors for business.

When electric trolleys still moved around, he sold fine fabrics, silk and Egyptian cotton. But business went sour, old residents moved away from the area and that part of downtown was filled mostly with street sellers during the day, catering for people who walked by the area, in and out of work, and homeless people - at night.

By the time the economy sunk really low - in the early eighties - his neighbor Jeremiah sold his business, gathered his things, and moved back to Santana. The building remained closed for decades, until it was sold, torn down, and a parking lot opened in its place. For forty-five years Jeremiah sold glasses. Reading and sun glasses. He passed away not long ago. A few months after Pereira's grandfather died, Joachim.

He drank coffee every afternoon, with cheese bought at the market two blocks down the street. Even when it was very hot - february afternoons were worse. At least he had the shade of the almond tree to cool down, a little, the hot breeze - when there was a breeze.

Pereira saw that tree grow old. He sold many leather bags, under its shade. And cotton socks. And saw and flerted with many women there. Some would stop to buy something, just to talk to him. Others would look at the business, and then at his dark brown eyes, smiling back and shining high on his large face, its skin darkened by the sun.

He never married, although had known many women. Pereira had a large smile, a soft but firm voice - that dropped to a deeper resonating tone when he screamed leather deals - and dark thick hair. Women liked his voice, the smile on his face and his way of looking always sure of what he said. He knew them well, liked them all, but went always back home alone.]

Images I saw here and there. Suggestions. Vestiges on white wax, my own trackings.