Playing ahead of the storm 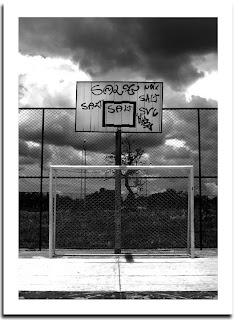 ...but the place was newly done.

Maybe that storm should just really fall.. and hard, on us..


[The construction started a few years earlier, and had never been finished. The green mossy lawn initially projected was left undone and weeds took over the unpaved area, growing wild during the raining season, stalks as high as five feet suffocating the lower shrubs and almost hid the court behind their leaves.

During the summer months, still punctuated with sudden storms that darken the sky and in just a few minutes pour incomprehensible amounts of water, the court was used more often, kids playing soccer or skateboarding on the neglected cement, a lighter patch of half-hidden terrain.

The abandoned court was in disarray. The cement tint mostly washed out and faded, the low metal fence surrounding the court was broken in patches, wires untied and rusting in the air, the net behind the goalposts torn and shredded, fraying out and mostly gone. The backboard was reduced to a group of disarranged, swollen sheets, its basket sacked, and yet shone absurdly half-covered with spray marks.

I kept going back each afternoon, making my way through the risen-again shrubs, and deliriously sitting at its center, waiting for the roaring storm, madly waiting for the half-naked tree to make its swift move, two steps to the right.]

Email ThisBlogThis!Share to TwitterShare to FacebookShare to Pinterest
Labels: Black and White, Brasilia, Texts in English