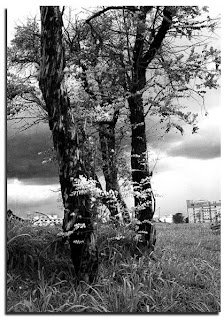 It did rain, after all..

[During the last two years I've lived in the white building on the back, in a small apartment with lightly gray walls - except for the kitchen, with white tiles and terracotta floor. The day of the accident I followed my usual routine: woke up at 7, coffee, went out for a run - Bonny was with me, juice, shower, heard the news, kissed Bonny, said goodbye and left. On my bike.

I was at work when the news arrived the plant had just spilled all of its contents in the air. It was a rush, people got crazy. I did not expect that, the accident, neither the choice of who would get in the buses going out of town. Some people I worked with managed to get a place. I could not leave Bonny behind. I liked the way the sunlight hit the living room wall and made it appear to sparkle softly. So did Bonny, I know. We would just sit side by side, sometimes, watching that quiet color mutation, the last direct hits only lightly touching the upper levels of the wall right below the ceiling. We had a clear view in front of us. The open field extended for miles, sparingly dotted with trees that bloom beautifully early May, but that by late November, and especially with this cold arriving sooner, had only a few remaining leaves, and were mostly asleep, it seemed, waiting for a colder winter to come and go, before they shine once more.

So we could see far away. And the plant was not under our view. Its white clouds would usually come from behind, sometimes in large patches, dotting the usually blue sky with softly white patterns. Cotton like.

After the spill the clouds kept coming, mostly dark. I could not reach Bonny. Could not make it to the apartment, they sealed the area. The ravine was mostly poisonous, they said. Everything everywhere probably had become, I thought. I could not make it there. And have not seen Bonny, since.

I kept coming back, for weeks. My hope falling along with my hair, my nails, oh, such pain! I miss my living room, that soft sparkle on the wall, the scent of fresh grass, coming from the ravine in front of us. Bonny. I miss Bonny so much.]

Email ThisBlogThis!Share to TwitterShare to FacebookShare to Pinterest
Labels: Black and White, Brasilia, Texts in English